In my next life, I’m coming back as a Dutch kid, cause boy, do they have it made. A recent UNICEF report noted Dutch children are the happiest in the world. And it’s no wonder. Dutch kids play at school until age 6, aren’t assigned any homework, eat chocolate sprinkles on bread for breakfast and can play in as much mud and dirt as their little Dutch hearts’ desire. Basically, they have a stress-free childhood full of fun and chocolate.

Some may ask how a country with a majority of grey rainy days and occasional strong bouts of wind and hail to boot can produce the happiest kids. Culture definitely plays a role as to why the little Dutchies are so happy. Holland’s progressive social system is   egalitarian, or liberal, for a better term. Its 16 million inhabitants are entitled to universal health care provided by highly regulated private providers and contribute a very small portion of their income to receive it. Sex ed is delivered in middle school with blunt uninhibitedness but without guilt from religious infringements or otherwise, and the accepted assumption is that older teens will most likely have sex. Accessible and affordable birth control is provided openly and tolerantly. There’s no teen pregnancy crisis, a very low abortion rate and an extremely healthy attitude about sex. I’ll never forget my Dutch friend telling me she needed a bigger bed for her teenage son who’d soon have his girlfriend sleeping over. GULP… And let’s not forget that prostitution is legal (and regulated) and so is smoking weed. With such a tolerant, open, free society that recently rejected a right-wing populist to lead their government, it’s no wonder Dutch kids here are super happy.

Freedoms abound in the low lands and that doesn’t only apply to adults. Dutch parents raise their kids with very few boundaries. They let their kids go – EVERYWHERE, whether climbing over your feet under your table at a restaurant, around you in the dry cleaner or jumping up and down repeatedly on the park bench next to you, they are free to play. Anywhere. No pushing manners, no shushing – scream as loud as you want! What does it matter you’re on a plane with 500 other passengers trying to sleep? Go ahead and chase your little brother – run like savages screaming and laughing round and round strangers waiting at the baggage claim at Schipol. That’s right, drive your Big Wheel right into the back of unsuspecting pedestrians on the sidewalk, and then get upset when they are blocking your raceway. You see, Dutch parents do not interfere with their child’s activity, even if it may be disturbing to some viewers.

If I were a cultural anthropologist I would surely be studying the parental styles of the Dutch. As I observe Dutch parents standing quietly and patiently – maybe observing, maybe lost in their own thoughts, while their kids are being kids all over unwitting strangers receiving the onslaught of their child’s happiness, I wonder, how can they not intervene? Is it too much interference to remind that very happy little Dutchie who is throwing snow at everyone who passes by, that it might not be a good idea to anger strangers getting hit with the snow they’re throwing? I know it doesn’t snow often here, but, OK. Do they simply not know – or care – where their happy curious four year old is in a restaurant as he gains some really strong antibodies while crawling all over the floor – and my feet – under my table? I do love a good foot rub, but I’d like to take my shoes off first.

As an American mom who gave birth here without drugs (even though I begged for them – yeah, did I mention the Dutch are also the most resilient in the world?) and started raising my son here and then in Copenhagen for his first three years, I was a mom who interfered. I rerouted my kid if he was infringing on other people’s personal space. I didn’t let him climb on strangers, throw snow – or anything – at other kids or adults, or scream for hours on a plane while wearing my own soundproof Beats by Dr. Dre. He wasn’t allowed to run around like a banshee unattended anywhere. Perhaps it’s the American in me. Perhaps I worried what other parents would think if my child wasn’t perfectly behaved. Perhaps I was afraid he’d be kidnapped if I took my eyes off him. I may have overparented. Whatever the reasons, I’m sure my American upbringing effected my parental style.

Dutch kids grow up differently than American kids. The truth is Dutch kids receive a tremendous benefit of learning resilience and independence here at a really young age. At around age 5 or 6 kids are no longer biked to school by their parents, they bike alongside them on the teeming bike paths, and eventually by age 7 or 8, go it alone. I always marvel when I see an 8 year old pedaling along through rain and sleet happily on his way to school. Wish I could do that – anytime – at age 49. 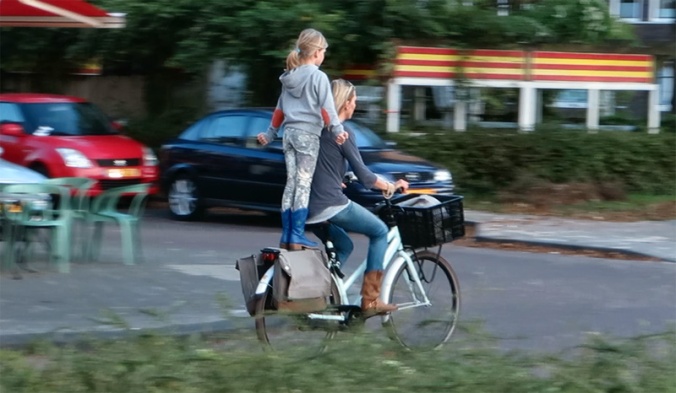 My first introduction to Dutch parents and kids up close and personal was when my Dutch landlord and his two young boys came to our apartment to help hang some pictures. In perfect English, his 8 year old asked to go find his friends on the street to play. His dad agreed and he took his 4 year old brother with him. After about a half hour, I looked outside to an empty quiet street. A little concerned I asked him, ” I don’t see your kids out here. You know where they are, right?” Of course, I realize now this was the American in me, worrying. I chuckled at his response, “Oh good, they’re not out there. That’s a good sign.”

Thinking back on when my own kids were that young, I don’t think there was ever a day I didn’t know where they were. I wouldn’t think because I couldn’t see them it was a good thing. But lo and behold, the sky didn’t fall that day and my friend’s two Dutch boys came ringing the bell about a half hour later, alive and well, after playing in an apartment half a block down the street with some old friends. It made a lasting impression on me.

For the most part, Dutch parents are not anxious. They’re not terribly overwhelmed. They’re not fretting about their kids behavior. They are impressively patient. And, this in turn, gives their kids a sense of independence, confidence and freedom. There is a lot to be said for happy kids ….and growing up to be happy adults. I say bring on those chocolate sprinkles, cut out that homework, get a healthy dose of daily outdoor exercise without having to wear a Fitbit to ensure it, and unload that boundless curiosity as you explore your ..and most probably another’s…. world. The longer I live here the more I understand the advantages of what I first viewed (and judged) as annoying, crazy, loud and perhaps even a smidgen dangerous child behavior. And when I’m almost run down on the street by a child and his Big Wheel, I remind myself how much I love living here with the richness of culture and personal freedoms, impressive creativity and opportunity for exploration. I remind myself it’s the Dutch that invented blue tooth, wi-if, the DVD, the CD, microscope, telescope and even the orange carrot. Be happy, little Dutchies!